Showing posts from October, 2020
Show all

October 30, 2020
1.        Broadly, there are two categories of two-dimensional finite elements. They are Flexure Elements and Continuum Elements. Flexure elements, usually referred to as shell elements, have all three translations and all three rotations as displacement fields. On the other hand, continuum elements have only in-plane translations as displacement fields. The present article will focus only on the continuum elements.  2.        All finite element packages include 2D continuum elements in the element library. The elements are often called 2D solid elements (for example the element PLANE182 in ANSYS). The formulation aspects of these elements are identical to those pertaining to three dimensional elements and are based on the Theory of Elasticity. The only difference is that the 2D elements have only two displacement fields and the nodes have only two degrees of freedom.   3.        Everything in the world is three-dimensional. But geometrical aspects and relative dimensions permit th
Post a Comment
Read more

In this article we will look into design requirements of tower bolts which we find as integral part of the doors of residential buildings. Design of exterior doors will be assessed from security point of view. Typical tower bolt arrangements are shown in the figure below. Fig. 1 The main part of the bolt is fastened to the door through set screws. When the door is to be secured the bolt will engage into the socket which is fastened to the frame through set screws. When all the bolts are in engaged position the door and the frame will be nearly integral. The security concern is that a burglar may use force from outside and break open the door. Load Transfer When any pushing force is applied to the door from outside, the load gets transferred to the frame partly at hinge locations and partly at socket locations. The latter force will have tendency to pull the sockets from the frame. In the entire assembly the set screw connections between the sockets and the frame happen to be the
37 comments
Read more

Structural Elements in Series: Assessment of the Effect of Stiffness Ratios by Kotur Raghavan

Structural Elements in Series, Influence of Stiffness Ratios In a recent article mechanics of structural elements which are either in series or in parallel was discussed ( https://www.fembestpractices.com/2020/10/load-transfer-in-series-and-parallel.html ). Components which are in series transfer the same load to one another. On the other hand, components placed in parallel share loads coming from a common contiguous component. In the current article, numerical assessment of the influence of stiffness ratios of structural elements in series is carried out with the help of a simple model. Fig. 1 The case study model consists of a uniformly loaded beam supported at the ends on linear springs.  The spring stiffness is a parameter in this and is non-dimensionalized with respect to the stiffness of uniformly loaded simply supported beam. The effects of non-dimensional stiffness, referred to as SR (stiffness ratio) on static deflections, stresses and natural frequencies are discussed.
3 comments
Read more

Load Transfer in Series and Parallel Paths by Kotur Raghavan 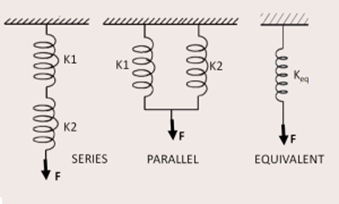 Recent articles were devoted for understanding of load paths in structures. The topic was discussed in the context of human body ( https://www.fembestpractices.com/2020/10/human-body-further-structural-insights.html ) and bicycle ( https://www.fembestpractices.com/2020/10/load-paths-in-structures-3-bicycle.html ).  These two simple examples bring home what is basically common to all structures. They are load application points and reaction or support points. In a mathematical sense, they form the extremities of any given structure which are connected to one another through the load path. Structural analysis is concerned with study of the components which occupy the load path. Of special significance are the members which are in series and those which are in parallel. By definition, the same load passes through contiguous members which are in series. On the other hand, members in parallel share load coming from a common contiguous member. In the human body, the two legs share the lo
4 comments
Read more 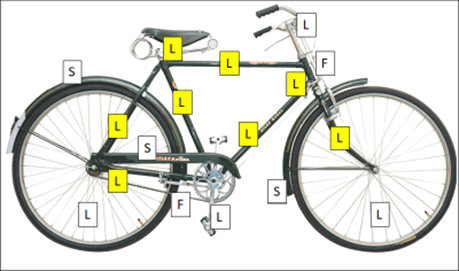 An earlier article ( https://www.fembestpractices.com/2020/10/load-paths-in-human-body-by-kotur.html ) focused on the load paths in human body for two different cases of loading conditions. A related article focused on the importance of load path. The components in the load path get stressed. In a human body the stress manifests as ‘pain’.  ( https://www.fembestpractices.com/2020/10/human-body-further-structural-insights.html ) In the present article we will load path in respect of a commonplace thing, a bicycle. Fig. 4.1, A Bicycle, Component Parts and Classification. A typical bicycle is shown in Fig 4.1. Items labelled L are all load bearing parts. They are the seat, the central frame (letter L with yellow fill) along with the wheels (including spokes), the handle and the pedal. Brake cables and chain drive form the functional part. Mud guard and the chain guard are safety features. The parts of the bicycle are assembled in such a way that the functional and safety compon
6 comments
Read more 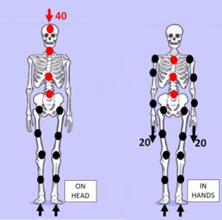 An earlier article ( https://www.fembestpractices.com/2020/10/load-paths-in-human-body-by-kotur.html ) focused on the load paths in human body for two different cases of loading conditions. The load paths were described with the help of a figure which is reproduced below. Fig. 3.1 , Human Skeleton Load paths. The load paths are indicated by red and black coloured circles. The colour code (red=40, Black=20) clearly indicate bifurcation and union of loads during their passage from the application points to reaction points. The body parts which are in the load path are very important from analysis point of view. They are indeed the “candidates for structural analysis”. When the load is placed on the head the hands and shoulders are merely functional (non-load-bearing) appendages. When the load is carried in hands the skull and the neck joint become functional appendages. Notice also that the ribs are not occupying the load path in either of the loading conditions. The same is true of
5 comments
Read more 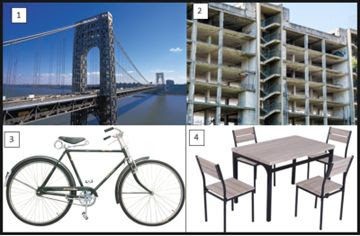 By definition, a structure is an assembly of materials which is devised to support and sustain loads. Four typical structures, a suspension bridge, a multi-storey building framework, a bicycle and dining set, are shown in Fig. 1.1. They all are designed to sustain and support some type of the load or other to meet “safely” their functional needs. Fig. 2.1 Examples of Structures Any assembly generally consists of three major categories of components or sub-assemblies. They are structural members, functional members and components intended for safety and aesthetics. The main concern of a structural engineer or a structural analyst is the assemblage of structural members or load-carrying members. The load carrying members form what is known as Load Path. In any active structure we have load application locations or regions. We also have support or reaction points. In general, the reaction points are the locations where the assembly interfaces with the ground. Sometimes load transfer p
2 comments
Read more 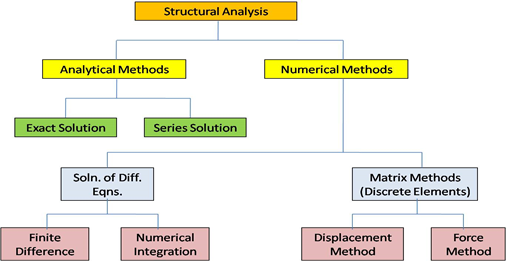 Structural analysis has been practiced for over two hundred years now. It has been an evolutionary process and a long journey. In the figure major approaches of structural analyses have been presented. Analytical methods or closed form solutions involve solutions of differential equation of equilibrium. Solutions have been obtained for Bernoulli-Euler beams and for circular and rectangular plates based on Kirchhoff theory. They were, however, for very simple edge conditions. For rectangular plates, for instance, solutions are available only when all the edges are simply supported (Navier’s solution). For more complex combinations of edge conditions engineers resorted to series solutions. They involved assumed displacement functions and energy principles. Rayleigh-Ritz, Galerkin methods are worth mentioning in this category. These were the only methods in vogue till mid-fifties and solutions were obtained through hand calculations or mechanical calculators. FIG. TYPES OF STRUCTURAL
9 comments
Read more
More posts