In this article we will look into design requirements of tower bolts which we find as integral part of the doors of residential buildings. Design of exterior doors will be assessed from security point of view. Typical tower bolt arrangements are shown in the figure below.

When any pushing force is applied to the door from outside, the load gets transferred to the frame partly at hinge locations and partly at socket locations. The latter force will have tendency to pull the sockets from the frame. In the entire assembly the set screw connections between the sockets and the frame happen to be the weakest points. For a given value of the applied force, the force coming on to the sockets can be considered to be ‘figure of merit’. Lesser the better. Rest of this article will focus on development of analysis model for computation of forces coming on to the sockets.

There are two main structural parts. The assembly of bolts and the door is one. The other is the assembly of frame and the sockets. When the load is applied from outside, it is transferred from the door assembly to the frame assembly at hinges and bolt locations. At the hinge locations, the load transfer is through rigid connections. At the bolt locations, the load transfer is through contacts. At this point, we take a look at the purpose of analysis. The main results of importance are the forces transferred from the socket to the frame. As the sockets and the frame are in series, these forces will be equal to the reactions at set screw locations if the sockets are constrained. It is even more so as the frame, being firmly built into the wall, is relatively, very stiff and can be considered to be rigid. Likewise, the door can be considered to be constrained at hinge location. Elimination of the frame from the analysis model is the first approximation.

We use the same logic to simplify simulation of socket. The bolt pulls the socket through contact and the same pulling force is experienced by the screws. Thus we arrive at the second approximation resulting in elimination of the sockets and associated contacts from the model.  Consequently, the tower bolts happen to be structural elements bonded to the door and constrained at the (socket) screw locations.

As the door thickness (about 30 mm) is very small relative to the door dimensions (1200 * 2000 mm), it is adequate to use shell elements in the simulation model.

The finite element model is shown in the figure below. 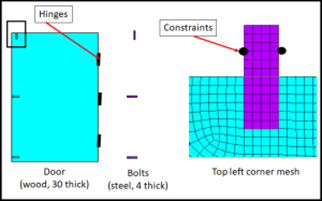 An arbitrary load of 500 newtons is applied. This is representative of the force generated when a strong man kicks the door from outside. The load is assumed to be uniformly distributed over a region of 100*100. For the purpose of comparison four different analyses are carried out corresponding to four different load application locations. The locations are in indicated as L1, L2 etc. in the figure below. In the figure are also shown reaction points R1 to R6 for reference. 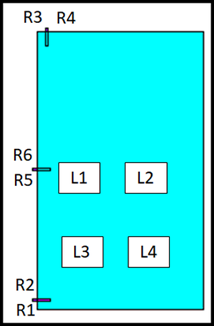 Typical results are shown in the figure below. These are for load application at L1. It contains deformation contours and reaction values. R2 and R4 are positive reactions whereas R1 and R3 are negative reactions. This indicates that there is local bending effect. Total reaction force from six constraints is about 340 newtons. Difference between this and the applied load will be equal to total reaction force at hinge locations. 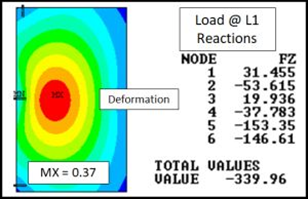 The computed reaction forces for other loading conditions are given in the figure below. Qualitatively they appear to be correct.

The foregoing is for qualitative understanding only. As we do not know the the strength of set screws and also because the load applied is arbitrary, no design inferences are intended.

The foregoing results are obtained for bolt length of 100 mm. Tower bolts are available in different sizes. Typical options are shown in the figure below. 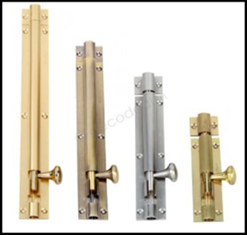 We note that for all the bolt sizes, the socket dimensions are unchanged. In all the cases the socket has provision for two set screws only. Intuitively it can be felt the longer bolts may not be advantageous from a security point of view. 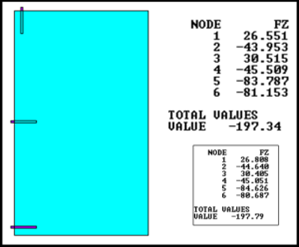 Reaction forces for bolt length of 200 mm are presented in the figure above. These are for the centrally applied loading condition (L2). The values corresponding to 100 mm length are in the inner box. We see practically no difference between the two sets of results.

1.       This study was taken up just as an exercise in simulation. Simulation means mathematical representation of a physical process. The model developed will be useful for assessing the adequacy of tower bolts. Based on the approach one can carry out parametric studies to arrive at optimum configurations.

2.       An important lesson has been on how to develop simulation models keeping in mind the purpose of analysis and the results of design importance.

3.       One needs to find justification for paying more money for longer tower bolts. Purely from a point of view of security the additional money spent may not be worth.