Keys are among the simplest mechanical elements. They are deployed to transmit power (torque) from a shaft to a hub or vice versa. The hubs are normally an itegral part of a bigger component such as a pulley, gearwheel or a turbine disk. The figure below is representative of the functioning of keys. 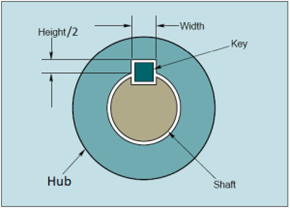 The applied torque from hub to the shaft or the other way is entirely transmitted through the key by way of contacts. There are four contact surfaces on the side flanks of the key. Two of them are active depending on the mode of power transmission and also the direction of rotation. In addition, the top and bottom surfaces also may come into play because the key normally has snug fit with the other two components.

In the figure below, free body diagrams of the key is shown. They correspond to the case of power transmission from the hub to the shaft in the anti-clockwise direction or from the shaft to the hub in the clockwise direction. The force P is the result of the applied torque.

The assumptions involved in design are that the key will fail either in shear or in compression. These are in line with contents of the book by Joseph Shigley and Charles Mischke (Mechanical Engineering Design, Sixth Edition) and the book by V B Bhandari (Design of Machine Elements, Third Edition). Shear failure is along AB and compression failure is at surfaces AC and BD. If W is the width of the key and H the height, then the areas resisting shear and compression are respectively W and H/2 per unit length of the key. If SA is the allowable stress in tension or compression, the load capacities (corresponding to P) of the key in shear and compression are given by

where L is the length of the key. Lower of these two values will form the design basis. It can be seen that load capacity in compression is lower in the case of square cross section (W = H).

It is notable here that the combined influence of the shear stress and compressive stresses is not considered here because the affected areas are mutually exclusive. As we will see later, the theme of this article revolves around this aspect.

The shaft diameter is taken to be 400 mm and the dimensions of the key are 60*60. An allowable stress of 200 MPa has also been assumed. For these data it the torque capacities have been calculated to be 1386, 1200 and 907 kilo newton-mm respectively for failure based on shear, compressive and combined stresses.

For the purpose of analysis it is assumed that the hub is transmitting torque to the shaft in the anti-clockwise direction. The inner radius of the shaft is constrained. Torque is applied in the form of equivalent tangential forces at the nodes on the outer periphery of the hub. In order to avoid penetration pf shaft into the hub, the interface nodes are radially coupled.

The deformation patterns in the assembly and the key alone are shown in Fig. 4. The patterns are along expected lines. 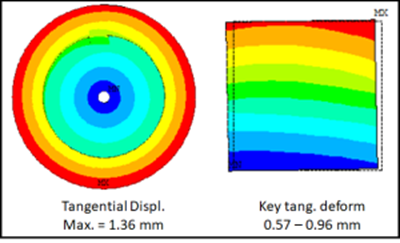 More important, however, are the stresses experienced by the key. The figure below shows the contours of von Mises stress. 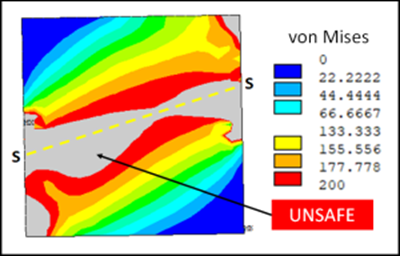 The contours are drawn for the range of 0 to 200. The regions adjoining the red regions on the higher side have stresses more than the allowable value of 200 MPa and hence are unsafe. They are seen in grey colour. It is observable that the unsafe region is nearly parallel to the load path and is spanning the entire width of the key. In order to have a detailed look into the stresses the variations of stresses along the line SS (Fig. 4) are looked into. 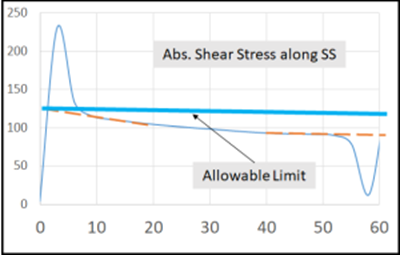 In figures 6 an7 the variations of absolute compressive stress and absolute shear stress are shown. The allowable limits for both these stress components are also indicated. The stresses are within safe limits but for the high values at ends. These are local effects due to singularities. An important observation from Fig. 6 is that the compressive stress is dominant all along the path. This contradicts the assumption made in the text books. 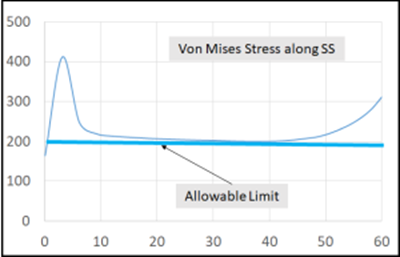 The variation of the von Mises stress along the load path is shown in Fig. 8. The stresses all along are above the allowable and this is in conformity with the contours seen in Fig. 5. 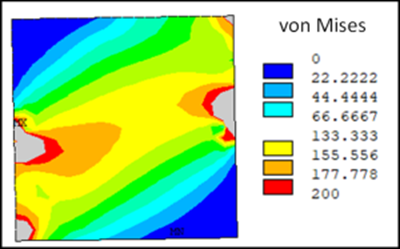 The contours for von Mises stress were computed as shown in Fig. 9. Grey colour regions are observed at the load transfer location and at load resistance location. These are local peaks. Importantly, however, the complete load path is seen to safe.

·         It was stated in the earlier article that normally only one stress component is normally considered in the traditional design practice. In the case of keys, two stress components have come into consideration. However, it is assumed that they act independently and on regions which are mutually exclusive. The fact that they are dominant all along the load path has been overlooked.

·         A recommendation thus is for introduction of suitable modification in Machine Design books.

A notable aspect of the current study is that the analysis model does not involve any assumption. A more rigorous 3D model can be used. But the results are not expected to be different. The load path has been accounted for very realistically. This has been possible due to the use of contact elements.