In an earlier article dealing with tower bolts, it was observed that deployment of more number of set screws turn out to be counter-productive.

The reason was that negative reaction forces induce positive reactions of higher magnitude in order to satisfy the equilibrium needs. It was also observed that the simplified model, in which displacement constraints are applied to simulate the socket behaviour, the some of the screws are effectively in compression. This condition, however, physically not possible. In this article we will first take a look into the phenomenon of negative reactions. Based on the understanding a revised model of the tower bolt will be arrived at. 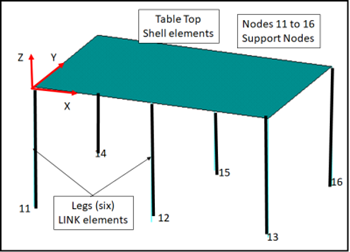 A table as shown in the figure above is taken up as a case study problem. Two-dimensional shell and one-dimensional link (or spar) elements are used as shown.  This is analysed for two different load cases. In the first case, a load (1000 newtons, downward) is centrally applied. In the second case the load is applied close to the midpoint of one of the shorter edges. 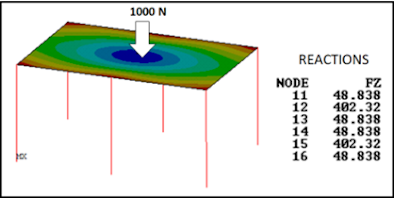 For the case of symmetric loading the deflection pattern and the reaction forces are shown in the figure 2 above. All the reactions are positive. This indicates that all the legs are supporting the load. 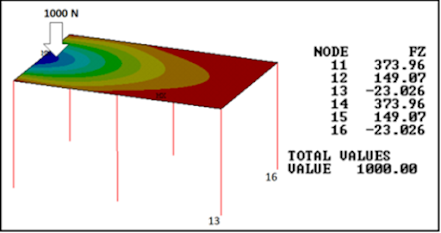 For the case of eccentrically applied load, the corresponding results are given in the figure 3 above. The nodes 13 and 16 are having negative reactions. The associated legs, which are farthest from the load application location, are trying to leave the ground. They cannot do so because of the applied displacement constraint.

The same problem is now solved by introducing nonlinearity. The nonlinearity is imposed by assigning the condition that the links can take only compressive loads. Because the elements behave differently in tension and compression, the problem becomes nonlinear. The results for this analysis are given in the Fig. 4 below. 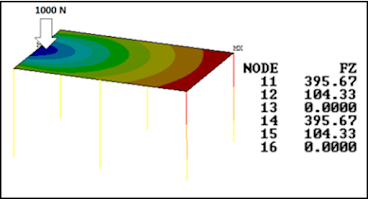 The legs at 13 and 16 are free now. Consequently the reactions forces at these nodes are zero. The applied load is supported by the other four support nodes – 11, 12, 14 and 15.

This problem shows the right way of dealing with negative reaction issues. The important fact is that the legs are not built into the ground and hence it is inappropriate to apply displacement constraint. We also note here that in the centrally laded case, it was alright to constrain the nodes. The reason is that all the legs supported the applied load.

What has been simulated is the so-called ‘support nonlinearity’. In addition to the option used in the current case study, there are two additional options available for simulating support nonlinearity. They are ‘tension-only’ link elements and contacts. The former is often referred to as CABLE element.

A Revisit to the Tower Bolt Problem

In light of the foregoing discussion and the lessons learnt, the tower bolt structural analysis model will now be slightly modified. In the model it was assumed that the bolts are integral appendages to the door. The projecting portion of the bolt was constrained at the set screw locations. In the revised model these constraints will be done away with. Instead, the bolt will be grounded through link elements. In the problem dealing with a table the legs were modelled using compression-only links. In the tower bolt problem the screws will be simulated using ‘tension-only’ link elements. 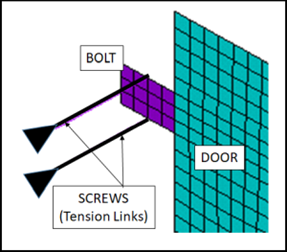 The changes which have been introduced are indicated in the figure above. All other modelling details remain unchanged. Earlier, two different configurations, having six screws and twelve screws were studied and compared. For both the cases comparison are made between the earlier model and the present model.  Comparative results are provided in the figures below. 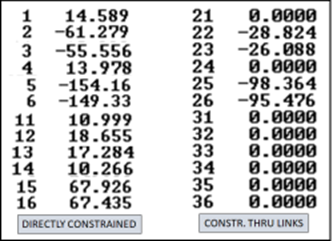 In the above figures nodes with number difference of twenty define the end nodes of the links. For example 1 is connected to 21, 11 to 31 etc. Zero reaction nodes are not supporting the applied loads. We see no inconsistencies with the revised model results. It can be seen that the positive reactions are identically same in the six-screw and twelve-screw configurations. This means that the additional screws corresponding to 11 to 16 are supporting no load. However, they will serve as second line of defence.

The inference is that use of tension-only links is acceptable and is recommended for use.

In the model, it is to be noted that the plate which is simulation the bolt is floating in the frame region but for the tension links. Under this condition, the deformation contours are as shown in the figure 8 below. 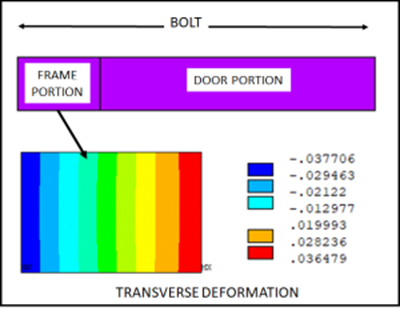 The frame portion of the bolt is undergoing both positive (away from the frame) and negative deformation. In reality, however, the bolt will not have full freedom. It is in close contact with the socket and the frame. The socket also is in contact with the frame. It may be expected that the bolt will touch the socket away from the wall and touch the frame near the wall. These aspects are not accounted for in the model. They can be accounted for only in full 3D model including contacts. Load paths and load sharing are likely to be different in the high fidelity model. That will be a future work.

1.       Learning the use of nonlinear elements which have bilinear behaviour.

2.       Understanding the phenomenon of negative reaction – symptoms and remedies.

4.       Recognition of the need for an even more rigorous model which includes 3D elements and contacts.