Adhemar Jean Claude Barre de Saint-Venant, better known as Saint-Venant, was a nineteenth century Mechanician and Mathematician. He has made pioneering contributions in the areas of fluid Mechanics and Theory of Elasticity.

There are three phrases of importance here which are underlined. The first is ‘statically equivalent’. This implies that the new systems of forces have the same resultant force and moment as the earlier one. The other two phrases together imply that the stresses at locations ‘sufficiently’ away from the load application region remain the same in an engineering sense.

The meaning of this can be understood with the help of two simple case study problems.

A tension strip is taken up and three different statically equivalent forces are applied at the free end. Details are given in the Fig. 2 below. 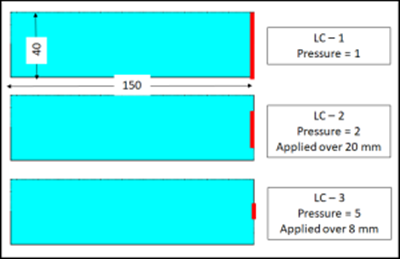 The resultant force in each of the three cases is 40 newtons applied at the midpoint. The contours of axial sress are given in the figure 3 below. 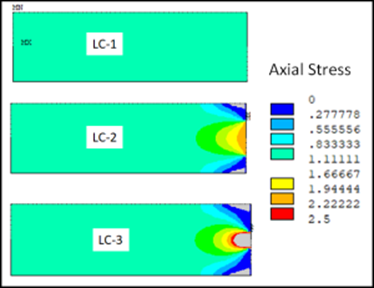 For easy comparison all the three contours are drawn to the same stress range of zero to 2.5. The nominal far-field stress is unity and this is observed to be the computed value in all the three cases away from the load application region. 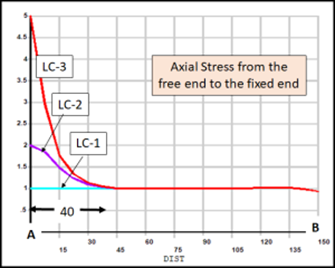 The variations of axial stress along the line AB, which is from the free end to the fixed end, are shown superimposed in Fig. 4 above. An important observation is that the stresses for the three loading conditions remain the same after a distance of about 40 mm. It is no coincidence that 40 mm happens to be the width of the tension strip. This is exactly what the Saint-Venant principle tells us. If the width were to 6o mm the stresses would have agreed with one another after a distance of 60 mm. 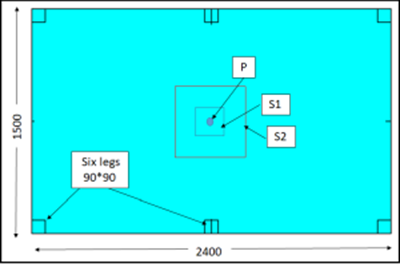 Details of the problem are given in Fig. 5. Regions P, S1 and S2 denote three loading conditions. Point P corresponds to extreme loading condition of point load (close to the case of person standing on toes). S1 is a square region 300*300 which would simulate the person standing in normal posture on the table at the centre. The region S2 is a square of size 600*600 and this would simulate the condition of the person sitting on the table. The table top is made of wood having elasticity modulus of 10000 MPa. The thickness is 18 mm.

Only the table top is modelled using shell elements. Constraints are applied at the table top-leg interfaces. Because of symmetry, only one quarter is analysed. A load of 1000 newtons is considered in the analysis and this would simulate the gravity load of a person weighing about 110 kilograms. 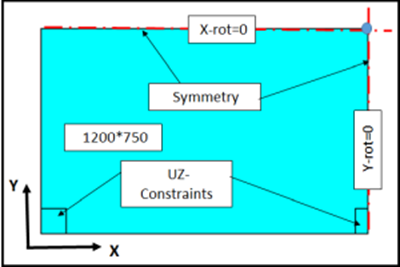 Details of the finite element model are shown in Fig. 6 above. In addition to the constraints indicated, all the in-plane translations are constrained. Because only a quarter of the full domain is considered, a load of 250 newtons is applied. 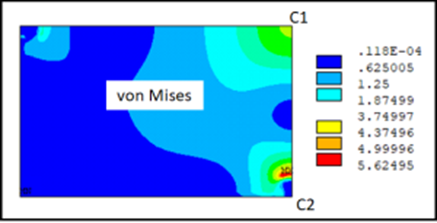 The contours of von Mises stress for the load distributed over S1 region are shown in Fig. 7 above. The contours will be same on either the top surface or the bottom surface. 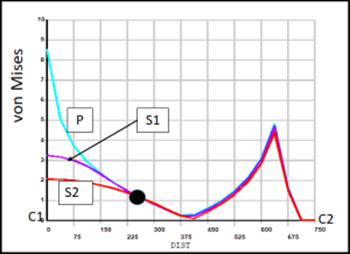 The variations of von Mises stress along the line joining C1 to C2 for the three loading conditions are shown superimposed in Fig. 8 above. The effect of the mode of load application on the stress is seen to cease after a distance of about 250 mm. This is comparable to the representative dimension of the region S2. It is to be noted that the high stress at C1 for point load application (P) is spurious and is caused by singularity.

An offshoot of the principle applies to self-equilibrated loads. It can be stated as

A self-equilibrated systems of tractions result in stresses that decay rapidly with distance from the region where tractions are applied and vanishes at points which are ‘sufficiently’ away.

We can get a feel for this by doing this experiment. Place your hand on the table and place a few books on the back of the palm. The palm gets compressed and you feel the pain locally in the palm. Now lift the hand along with the books. Pain will now be felt over rest of the hand all the up to the shoulders. When the hand is on the table the applied load was locally reacted to (short load path) and there is local equilibrium. But when the hand is lifted the reaction the reaction point is elsewhere and the load path is longer.

We will now get insight into this with the help of a case study involving overlapping plates. 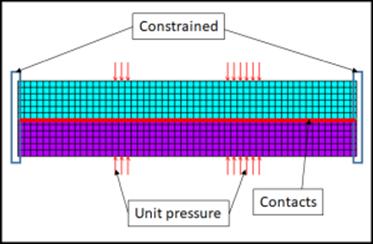 In Fig. 9 is shown the model taken up for analysis. This is a two-dimensional representation of two overlapping plates clamped together at discrete points. The clamp forces are simulated in the form of surface pressures as shown. The applied loads or in self-equilibrium. Clamping force transmitted through contacts as shown.

In Fig. 10, the contours of compressive stress are shown. The red coloured regions have near-zero stress. 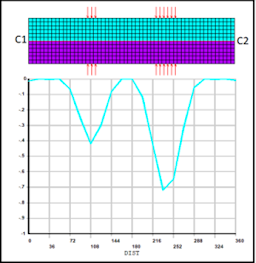 The variation of the compressive stress along the interface in one of the plates is shown in Fig. 11 above. The regions of non-zero stress are longer than the pressure application zone due to the so-called pressure cone (also called the cone of compression) effect. However, the stress outside the pressure cone regions is consistent with the Saint-Venant principle.

·         The Saint-Venant principle has been demonstrated from two different perspectives. In both the forms, the principle can be exploited for simplification of finite element models.

·         The analyst has keep in mind two aspects while making use of the principle to simplify the model. They are the purpose of analysis and the region of interest or the results of importance. In addition, of course, some amount of engineering judgment will be necessary.

·         Application of statically equivalent loads becomes handy to overcome many load simulation challenges. For example, the load transfer from a shaft to the bearing is quite complex in oil film as well as in rolling element bearings. Rigorous model will be needed only when the local stresses or of interest. Otherwise, it will suffice to apply the load in the form of uniform pressure or even nodal forces.

·         Regarding self-equilibrated loads, the problem considered in this article is typical of threaded fasteners. In any bolted joint, the bolt tension due to preload is in equilibrium with compressive forces in the joint members. For studying the local effects it will be sufficient to analyse one fastener assembly. The domain should cover the cone of compression. The results are insensitive to far-field displacement constraints.