Tower Bolts – 2, A Review of Assumptions by Kotur Raghavan

In an earlier article, a simulation model for structural assessment of tower bolts was discussed (https://www.fembestpractices.com/2020/10/design-analysis-of-tower-bolts-by-kotur.html ). The model was developed by invoking certain simplifying assumptions. The most important simplification was elimination of the frame and the socket from the analysis model. As a result, the bolt was considered to be an integral extension of the door and was constrained at the set screw locations. One of the concerns from the computed results was negative reactions at some of the constraint locations. This article is for a review of the model from this point of view.

A slightly different bolt configuration, as shown in the Fig. 1,  is presently considered. 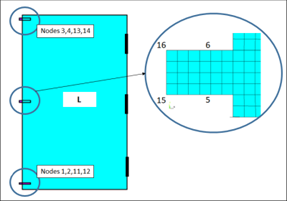 Six possible constraint locations nodes 1 to 6 and nodes 11 to 16 are identified as shown. Two different analyses are carried out. In the first case, constraints are applied at nodes 1 to 6. In the second case all twelve nodes are constrained. In both the cases load is applied in the region L as shown.

For Case 1 analysis, the reaction forces are given below.

The figure gives reaction forces corresponding to the constrained nodes 1 to 6. It is to be noted here that algebraically negative reaction forces are positive reactions in a physical sense. Nodes 5 and 6, which are in line with the applied load, both show positive reactions. At the other two locations, the constrained nodes nearer to the load are reacting positively. The pattern indicates that both the top and bottom bolts are ‘locally’ bending about the horizontal axis.

For Case 2, the reaction forces are given below.

As compared to Case 1, there are two notable aspects here.

1.       The central bolt nodes 15 and 16, which are farther away from the load application point, are experiencing negative reactions.  At top and bottom, all the additional constrained nodes are also showing negative reactions. The implication is that the central bolt is bending locally about the vertical axis. The other two bolts are bending locally about some oblique axes.

1.       The observed reaction patterns and magnitudes are understandable and are valid from mechanics point of view.

2.       However, from a structural design point of view the implication is that deployment of additional screws happen to be counter-productive.

3.       The above statement does not make engineering sense. Hence we look for possible lacunae in the simulation model.

4.       We recall here that the displacement constraint are applied at the set screw locations. Constraints allow reactions of either sense. In the present problem, positive reactions indicate tension in the screw and negative reactions correspond to compression.

5.       Whereas the screws can resist tensile load coming on to them they cannot resist compressive forces. Compressive forces in the door-bolt-frame assembly go directly to the frame.

6.       Thus there obviously a shortcoming in the simulation model. It is an unrealistically oversimplified model.

In a sequel to the present article a more rigorous model will be presented.