1.       In any finite element structural analysis model, minimum number of constraints refer to the constraints needed just to prevent rigid body motion. In a mathematical sense, it is the minimum number of degrees of freedom to be arrested so that the stiffness matrix becomes non-singular so that a solution is possible.

4.       In structural models involving flexural elements, that is beams and shells, all the required constraints can be applied at a single node and a solution will be possible.

5.       In Fig. 1 above typical structures comprising of beam and shell elements are shown. In order to arrest all rigid body motions (translations and rotations) it is enough to constrain all the six DOF’s at any arbitrary node like the ones indicated by dark circles.

6.       In the case of continuum elements, which do not have rotational DOF’s, one has to choose translational DOF’s in suitable combinations in order to effect arresting of rotations.

7.       In the case of structures in two-dimensional plane, the approach is to choose two arbitrary nodes. In one of the nodes (say N1) translations in X- and Y- directions are to be constrained. At the other node (say N2) it is necessary to constrain the translation in the direction normal to the line joining N1 to N2. Two of the many possible methods are shown in Fig. 2 above. It is easy to visualize that constraints at N1 arrest rigid body translations. The constraint at N2, in combination with the ones at N1, arrest the in-plane rotation. 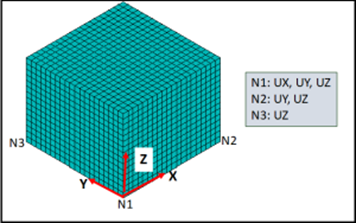 9.       Just as the points (nodes) to be chosen are arbitrary, the lines joining them need not necessarily be along the global directions. All that is necessary is the choice of three nodes, N1, N2 and N3, which are non-collinear. It is then necessary to define a local coordinate system with origin at N1 and the local X- axis along the line joining N1 to N2.  The third node N3 will define the local XY plane. It will be necessary also to “orient” the three nodes to this local coordinate system.  The constraints, using the same scheme as above, will get applied in the local directions with the same effect. This procedure can be easily coded and will be handy while dealing with large size problems.

The principle of minimum constraints find the following important uses.

The foregoing applications will be discussed in future publications.