Submodeling is a technique usually adopted in order to fine-tune the stress results at critical locations. One conducts local analysis with refined mesh by imposing the boundary conditions from the full or global model. Deformations from the full (coarse) model are interpolated with the help of element shape functions. This is the conventional approach and is based on Saint-Venant’s principle. This can be called as Cut-Boundary-Displacement (CBD) approach. The approach is well established and promotes productivity enhancements as the need to refine the mesh in the entire structure is eliminated. However, there are two limitations. The first one is that the geometry should be identically similar in the global and the submodel. If there is any change in stiffness the computed stresses will be in error.  In addition, it is valid strictly for linear analysis.

The above limitations can be overcome by resorting to one of the two variants. The first alternative is based on imposing partly CBD and partly Cut-Boundary-Forces (CBD-CBF). The second approach will make use of cut-boundary forces only (CBF). This article is concerned solely with the latter approach.

The steps involved are as follows.

2.       On all the cut boundaries apply the nodal forces from the results of the global model. If the meshes are identical this is a straight forward step.

3.       If the meshes are not identical, one need to make use of the resultant forces and moments in the global model and transfer the same to the nodes in the submodel using multi pint constraints (MPC). For example, the operation RBE3 in either Nastran or ANSYS needs to be invoked.

5.       The submodel will thus be in self-equilibrium. It can be solved by imposing minimum constraints appropriately.

The foregoing procedure is not recommended if the goal is just to get more accurate description of the stress field. It is recommended if there are any changes in geometry or if nonlinear analysis, particularly elastic-plastic, analysis is needed.

A trapezoidal cantilever beam shown in Fig. 1 is chosen as the example problem.

The figure contains the global mode. All the necessary details are described. Coarse mesh with linear elements is adopted. 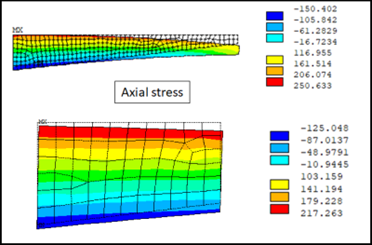 The contours of axial stress for the whole beam and the middle region are shown in Fig. 2. However, these results are not of importance. The results of importance are the cut boundary forces and moments on the boundaries of the region of interest. The resultant forces acting on the two boundaries are given in the box below. The moments are about the mid-point of the respective lines.

The forces and moments as above will now be used for analyzing a beam with different geometry in the central region. The target configuration is as shown in Fig. 3.

As can be seen, a groove is introduced in the original geometry. The central region is the domain for the submodel. Details of the submodel are given in Fig. 3. 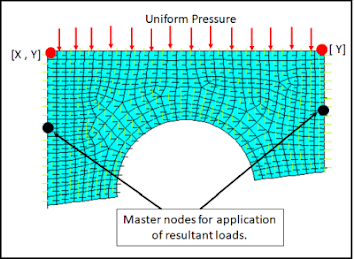 Quadratic elements with finer mesh is used in the submodel. The two master nodes distribute the resultant loads on the (slave) nodes of the respective boundary edges. Uniform pressure as in the global model is applied. Displacement constraints are imposed on the two top corner nodes as indicated.

Axial stresses are as shown in Fig. 5. The reaction forces at the constrained degrees of freedom are given in the box above. The values confirm that the loads and also the constraints are properly applied.

For the sake of comparison a full model with the groove was analysed. Quadratic elements with the same mesh density as in the submodel was used. The results are given in fig. 6. They can be seen to be in excellent agreement with the submodel results.

1.       An important useful application of minimum constraints has been demonstrated. The traditional Submodeling technique (CBD) which does not permit geometry changes in the submodel. This limitation has been addressed.

2.       Change in geometry implies change in stiffness. Therefore it is possible to carry out local elastic-plastic analysis using the results of elastic analysis of the global model.

3.       The size of the groove in the present study was arbitrary. There is no limitation as far as geometry changes are concerned. This point of is of significance and comes handy when one is trying to compare different design alternatives. Local analyses are adequate and one can avoid expensive repeated global analyses.

5.       It needs to be added here that the technique described in this article is not very well known. It needs to be popularized. Code developers have a role to play here.

-BACK TO THE HOMEPAGE